Around ten years ago I had the pleasure of writing up a profile on Kingston Family Vineyards, a cool-climate estate based in Chile's Casablanca Valley for the San Francisco Chronicle.

The article was more or less assigned to me by Jon Bonne, then wine editor of the Chronicle. Courtney Kingston came to my place, a little shack in Bernal Heights, and told me what her family was up to in Chile, with the counsel of California Pinot Noir veteran winemaker Byron Kosuge (formerly of Saintsbury).

At the time, the story could have fairly been called premature. Kingston's wines were absolutely good and interesting, but not necessarily mind-blowing. They were adventurous and curious in the best possible ways, at least in my estimation, and the wines were definitely in an elegant style represented by only a few wineries in Chile.

But it was also a timely article, because at the same time that American winemakers were working closer and closer to the cold Pacific Ocean coast in California, winemakers in Chile were doing the exact same thing, albeit mabe a few years behind. In both places, the ocean is quite cold because of the prevailing currents, and that cold water temperature exerts a dominant influence over coastal climates. Very few people swim in these oceans without a drysuit. The pictures that you see may look sunny, but trust me, the water is freezing cold - much better suited to sharks and seals than humans.

This movement toward the coast in South America also marked the first major investments of Chilean winegrowers in Pinot Noir, a grape they were really not familiar with to date, and Syrah, another first impression. Both the Californian and Chilean winemaking cultures were exploring what was possible on the climactic fringes, more elegant expressions of Pinot Noir, Chardonnay, Syrah and Sauvignon Blanc than had been created to date.

Ten years later, Courtney tracks me down, proposing something of a reprise, if you will. Flattered by the prospect, I was happy to see her again, and also to taste the wines. Courtney is still residing in the south bay. I have since relocated from Bernal Heights, where I met her last time, to updated, improved digs in West Oakland.

This time she has Kingston's winemaker since 2015, Amael Orrego, in tow. Orrego is Chilean, but he worked at Flowers Vineyard and Winery on the Sonoma Coast, which is near ideal resume fodder, because Flowers was one of the first and most successful growers of Pinot Noir and Chardonnay on the coldest fringes of Sonoma County's Pacific coast. Having first-hand accounts from one of California's cold-climate pioneers must have tremendous value for someone attempting to translate the same feats to a South American setting.

Orrego has convinced the Kingston family to convert the estate vineyards to certified organic - that's still in process. It takes about three years of growing without artificial fertilizers or pesticides before the vineyards can be certified organic.

Byron Kosuge (formerly winemaker at Saintsbury, currently of B. Kosuge fame) has been Kingston Family Vinyeyards' winemaker and consultant from the start 15 years ago and continues to play an important consulting role. Kosuge deserves credit for steadily improving quality over the years.

Courtney Kingston says the family still sells about 2/3 of its grapes to other wineries and that demand is pretty good. She says they have kind of modeled themselves after Hirsch Vineyards on the Sonoma Coast in that way.

Kingston is still a pretty small brand that mostly finds its way onto the wine lists of knowledgeable sommeliers these days. "A lot of times, we're the only Chilean wine on the list," says Kingston. "Our wines don't really sell at retail. We don't have that kind of marketing budget. Our tasting room was really intended just for our buyers or distributors. We didn't expect actual visitors, but suddenly they started showing up."

These days the winery is experimenting a bit with some different clones of Pinot Noir, Chardonnay and Syrah that have become available in Chile. "We also planted some Gamay and Viognier and a bit of Merlot.

The wines are named for horses on the Kingston family ranch in Chile.

Check out a three minute video (with lots of pretty horses) about Kingston Family here.

My memories of the wines from ten years ago are not perfect. But my impression is that the wines have improved somewhat. The Pinot Noirs and Syrahs seem more complex and more artfully made. The vineyards are more mature, and that's almost certainly a factor.

Kingston 2016 Sauvignon Blanc 'Cariblanco' Casablanca Valley, Chile ($20) Made mostly from mature vines planted in 1999, this is a subtle Sauvignon Blanc with pretty, taut pear, mineral and coastal saline flavors. Amael says there's very little sulfur used, just a bit before bottling. I like it, but I almost with it had some more exotic notes given the vineyard location and region.  (88 points)

Courtney says that one of the challenges of making Sauvignon Blanc in Chile is that much of it is made as a commodity and low priced. I understand the price pressure aspects of that argument, but I appreciate the directness and simplicity of the best Chilean Sauvignon Blanc. I think the low-end consistency and stylistic thread is actually a long-term advantage for Sauvingon Blanc from Chile, and the exotic qualities of some of the most extreme cool-climate Sauvignons justify a higher price point for those seeking something special.

Kingston 2016 Chardonnay 'Sabino' Casablanca Valley, Chile ($30) The Chardonnay is interesting. It is much less reliant on new oak than you might expect, but gets added body and texture from full malolactic fermentation. While 100% malolactic fermentation makes some California Chardonnays flabby and dull, it makes perfect sense for a leaner, cool-climate Chardonnay like this. "Its so high acid that it needs malolactic," says Amael. Notes of caramel, hazelnut over citrus, apricot notes. Fermented with wild yeast. Very elegant and precise.  (91 points)

Kingston 2016 'Tobiano' Pinot Noir Casablanca Valley, Chile ($24) "I believe we understand the variety better than we did, and make it more pure and fresh," says Kingston. This is the entry level, especially pretty Pinot Noir with cherry, raspberry, blueberry, violet notes. It's light, clean, fresh, and balanced, only 12.5% alcohol. There's almost no, if any, new oak on it. I really like this on a gut level. (91 points)

Kingston 2016 'Alazan' Pinot Noir, Casablanca Valley, Chile ($30) 82% whole cluster (including stems). More spice by virtue of the stems for sure. Still fresh, more layers of deep red fruit and pretty blueberry fresh notes. More texture, too. Not heavy at all. This is really good. The vines are maturing and we're better expressing the place.  (93 points)

Kingston 2015 'Bayo Oscuro' Syrah, Casablanca Valley, Chile ($38) Pretty bold, with great acid. WE do make it with hand punch-downs, low extraction, we just age it a bit longer in barrel.It has blackberry, bacon, blueberry, notes, red currant, cranberry. Great focus, all the hallmarks of quality Syrah. They also use some whole cluster influence, using the stems, which adds some spice and tannin. Really nice (92 points) 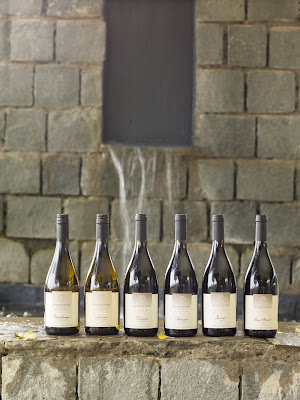 Posted by Skyscraper at 6:54 PM